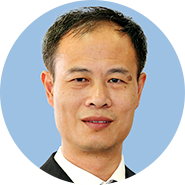 Dr. Hualiang Jiang obtained his bachelor's degree from the Department of Chemistry, Nanjing University in 1987. He received his master’s degree in Physical Chemistry from East China Normal University in 1992. In 1995, he obtained his Ph.D. degree in Medicinal Chemistry from Shanghai Institute of Materia Medica (SIMM), Chinese Academy of Sciences (CAS). He was a member of scientific committees of several major research programs in China, such as 863 National High Technology Program, National Basic Research Program, and Major Research Project of National Natural Science Foundation of China. He also serves as Associate Editor of Journal of Medicinal Chemistry and editorial board members of several journals such as The Journal of Biological Chemistry.

Dr. Jiang's has been engaged in the establishment of the innovative drug research platform by integrating target discovery and drug design methods and technologies. He developed a series of new methods for drug target discovery and drug design, which have been widely used and drawn a great deal of attention from the research community. Targeting several diseases such as pulmonary hypertension, schizophrenia, erectile disorder and Alzheimer’s disease, Dr. Jiang and his co-workers obtained a number of drug candidates by using computational drug design, organic synthesis and drug development technologies. Some compounds have entered into phase I or II clinical trial. Over the years, Dr. Jiang has received the Natural Science Award of China, the National Award for Technological Invention, the Science and Technology Progress Prize from Ho Leung Ho Lee Foundation, etc.